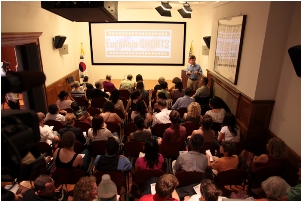 The June 8 screening of EuroAsia Shorts 2011 featuring short films from Korea and Spain drew more than 100 guests to the Korean Cultural Center for a unique blend of culture, cinema, and an international discussion about relations between men and women.

"It was a great selection of films", said guest Victoria Wood. "It's wonderful to see films you wouldn't get via Netflix or in a theater, and a very interesting paring of cultures with Korean and Spain".

This year's EuroAsia Shorts included five screenings June 6-10 at embassies and cultural centers, and presented short films from eight countries in Europe and Asia, plus the United States, under the overarching theme of men, women, and the challenges of relating to one another.

Wednesday's screening presented four films: "The Rabbit" (Korea, 2008), by director Lee Soo-youn, "In Pursuit of the Moonlight" (Korea, 2010), by director Kim Sun-hee, El Premio (Spain, 2010), by directors Pilar Castro & Luis Zahera, and Di Mi Que Yo (Spain, 2009), by director Mateo Gil. As the conflict between genders is common throughout the cultures, the audiences engaged in afterwards discussion to talk about different styles of communication, their personal reactions, and connections evident in the films.

Discussant John Feffer, co-director of Foreign Policy in Focus at the Institute of Policy Studies, noted the remarkable increase of women's independence in Korean society in recent decades and the appreciation as well as conflicts created by this social shift. This theme was particularly evident in "The Rabbit", in which four Korean men discuss what they're looking for in a woman, and despite their frustrations, agree that women deserve to be treated as equals.

Audiences also compared the appearance in the films of a more subtle Korean communication style to the more bold and direct style of dialogue in the Spanish films, and how these differences may reflect societal and cultural attitudes toward the issue of relationships as a whole.

In discussing gender roles in different cultures, especially by contrasting Western and Eastern traditions, audience members expressed their appreciation for this unique and meaningful opportunity.

The Euroasia Short Film Festival is scheduled to have its last screening on Friday, June 10, at Embassy of Italy, screening short films from every participant country. For more information, or to find out about future EuroAsia Shorts events and events from each organizer, visit www.EuroAsiaShorts.com.

By Erin Kim and Adam Wojciechowicz

"EuroAsia Shorts Pairs Korean, Spanish Films about Men and Women for Sixth Annual Festival"
by HanCinema is licensed under a Creative Commons Attribution-Share Alike 3.0 Unported License.
Based on a work from this source