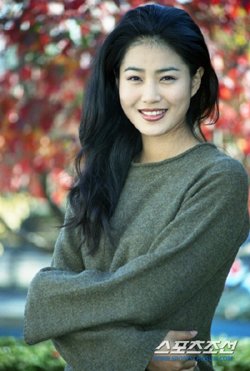 Former Miss Korea Choi Yoon-young-I was questioned by police on Monday over the theft of an expensive wallet from an acquaintance. Gangnam police said Choi was charged with stealing it when she visited the friend's house in the swanky Cheongdam district in southern Seoul last Wednesday.

The victim reported the theft to police who later discovered surveillance camera footage of Choi cashing the W100,000 checks.

The U.S.-educated beauty queen debuted in Korean showbusiness when she entered the Miss Korea contest in the mid 1990s. She has appeared in various TV series and movies. She also started her own business as a yoga instructor, releasing instructional videos and opening a yoga gym.

Police believe Choi stole the money due to money problems stemming from the failure of her yoga business.