[Exclusive] Hyun Bin was different, he gave up his stand-down 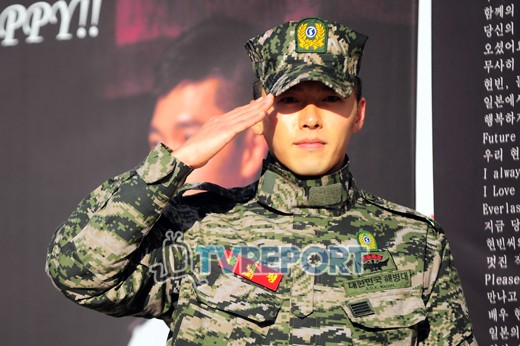 Actor Hyun Bin (31, Kim Tae-pyeong) turned out to have received vacation the same as any other officers.

A Marines source told TV Report recently that, "Kim Tae-pyeong didn't even complete his 60 days off".

"He probably had less vacation that any other soldiers. He gave up the stand-downs he got for participating in encouraging promotional events. He was a good role model to the other soldiers too".

Hyun Bin volunteered into the Marines on the 7th of March 2011 and served role model-like duty for a year and 9 months, finishing on the 6th of December last year.

Hyun Bin was acknowledged for his exemplary military life and was awarded a commendation from the National Defense Agency and Marines Commander.

The reasons for these awards were, "Although he's a top star he risked himself to commit to the military life and was sincere during his whole time".

This kind of example is comparable to Rain, who is currently in the spotlight for his relationship with Kim Tae-hee and speculations about favorable vacations.

As the scandal between Kim Tae-hee and Rain broke out, issues about Rain's vocational days rose to the surface. There have been endless complaints on the National Defense Agency homepage about the excessive days of stand-downs celebrity soldiers get.

"[Exclusive] Hyun Bin was different, he gave up his stand-down"
by HanCinema is licensed under a Creative Commons Attribution-Share Alike 3.0 Unported License.
Based on a work from this source