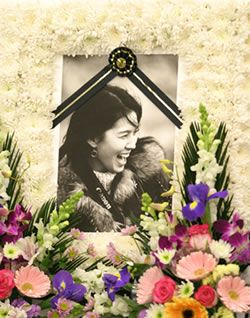 Fans of the late actress Lee Eun-joo have gathered to commemorate the 3rd anniversary of her death at Chungah Park in Ilsan where her ashes lay.

An official at the park said although almost three years have passed since her tragic death, her fans still remain loyal. He said many fans visited the crypt at Chungah Park a few weeks before the third anniversary of her passing.

Lee committed suicide on February 22, 2005 at the age of 25. At the time, Lee had established herself as one of the top young Korean actresses, starring in numerous successful films including 'Lover's Concerto' and 'The Scarlet Letter' as well as small-screen drama series such as 'Phoenix'.

Three years have passed but in the minds and hearts of Lee's fans, the memories of their beloved actress remain as clear as ever.