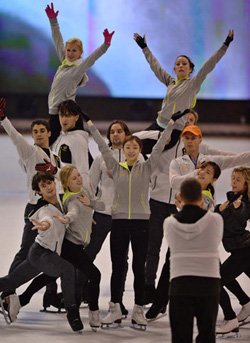 Kim Yu-na practices with fellow skaters ahead of an ice show at the Olympic Gymnastics Stadium in Seoul on Thursday.

Kim Yu-na will host an ice show for three days at the Olympic Gymnastics Stadium in Seoul from Friday. Fans and critics will be watching the reigning Olympic figure skating champion with interest to catch any hints of her new programs for the upcoming Olympic season.

At a previous ice show she held in Korea in the summer of 2009, six months before the 2010 Winter Olympics in Vancouver, Kim unveiled parts of her new season program while skating alone to Beethoven's Moonlight Piano Sonata in the wake of a group skate.

This year's ice show will be directed by Kim's long-time choreographer David Wilson of Canada, which has heightened expectations that parts of her new program will be unveiled.

Kim had an open practice session for reporters on Thursday. "The music for my new free skate routine is completely different from 'Les Misérables', which I used last season", she said. "I'll finish putting the short program together with Wilson after the ice show".