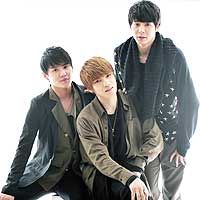 It takes more than gifts and fan letters to express your support and affection to stars these days. The fans of pop group JYJ have arranged special bus advertisements this time, following fans who bought newspaper ads or donated money to needy organizations under their favorite celebrity's name.

The advertisement, which will be put on the sides of buses, reads "We support your youth" and will be on display for a month in Seoul, Gwangju, Daejeon, Daegu and Busan.

The advertisement was arranged by fans and fan clubs with the goal to support JYJ and its activities.

"We hope this campaign will help support not only the fans and singers, but also those who create and consume popular culture", said a representative from one of the fan clubs.

JYJ, consists of former members of top boy band TVXQ _ Kim Jae-joong, Park Yoo-chun and Junsu _ and made its debut last year after the end of the original group's lineup.

The three members filed a lawsuit against their former agency SM Entertainment citing unfair contracts and distribution of earnings. The group released its album "The Beginning" and also held concert tours while the remaining two members of TVXQ _ Yunho and Kim Jae-joong_ continued their activities under the original name early this year.