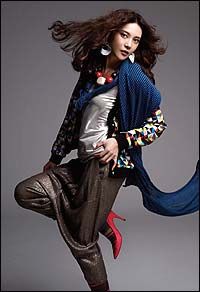 For fashion-savvy men and women, television is the easiest way to tune into the latest trends. Nowadays, cable channels offer various programs from both home and abroad, and it's up to viewers to pick the most suitable show to fit their taste.

Browsing the shows aired here, one may find that local offerings tend to feature only one side of fashion and also discover the need for more entertaining, creative ideas to attract the eyes and ears of viewers. What is fashion without a bit of innovation and creativity, anyway?

The more information, the better

Fashion programs in Korea follow a common pattern: the more information, the better.
Many shows here offer advice on the act of purchasing: where to buy what, how to get the best deal, and which season or time is the best to open your wallets.

"It hasn't been long since viewers have shown such a vast interest in fashion. We have a limited amount of time to produce and make such shows and one of the most important factors is the budget. Limited time and budget doesn't allow for a lot of possibilities, and the fastest and most effective way to satisfy viewers is to offer them useful information", Lee Woo-chul, chief producer of cable channel OnStyle's production team, told The Korea Times.

Satisfying viewers under a tight budget is one thing, but Koreans being info-savvy is not a trend, but actually a cultural trait.

"Korean consumers are relatively shy when it comes to making decisions about purchases. On the other hand, consumers in the United States and Western cultures tend to follow a more individualistic tendency, thus have more confidence in their decisions", wrote Yeo Jun-sang, marketing expert and writer of the book "The 33 Immutable Laws of Marketing in Korea".

"We (Korean consumers) compare choices with others, and we also look for external factors that will justify our decisions", he added.

This explains why Korean viewers and consumers are interested in getting their hands and eyes on as much information possible, which leads producers to continuously come up with such shows.

Another easy example to gauge the interest of viewers is to visit the program's Web site. Most comments are about products aired during the program, asking where viewers can purchase them. Numerous comments are posted after every episode, and viewers can get even more information through the Web site.

A tough crowd to satisfy

For Koreans, making decisions is not so easy when there is so much choice. That's why they study. And when they study, they study hard.

"Sometimes, viewers know more than us (in terms of fashion). In my opinion, I think there should be a more specialized system within the production team. We have to know as much as fashion magazine editors to cater to viewers with the exact information they are looking for. We have to know what we are talking about. We have to be faster and work twice as hard", Lee said.

One of the best known programs that follow this pattern is StoryOn's "Talk & City". Hosted by actress Lee Seung-yeon, comedienne Kim Hyo-jin-II and fashion director Woo Jong-wan, the show is in its fourth season and was also made into a book "Talk & City Style Shopping Book".

The three hosts wander around the country seeking hip, trendy and useful information regarding fashion, food, shopping and makeup, and their journey has become an effective channel for viewers looking for handy tips.

Another show is OnStyle's "Style Magazine" hosted by model Cha Ye-ryun. Launched in 2006, the program is one of the first fashion-related shows in Korea and strives to offer the trendiest and fastest news possible.

"Everyone on the production team has to stay alert and when we confront something we don't know, we contact an expert immediately to make sure everything is in order. (In this sense), viewers can be a bit scary", he said laughing.

Viewers, being informative as ever, already understand the need for such diversity by watching such shows on television and via the Internet and they are not afraid to point it out.

"Local shows have a strong point of being closer to reality: viewers can actually visit the shops featured in the program and purchase items there. But other than that, it's hard to ignore the fact that we lack in creativity", said Maria Kim, a 26-year-old office worker who watches local fashion programs from time to time.
OnStyle has been at the forefront of bringing Korean versions of already popular fashion reality programs, including "Project Runway Korea" and the soon-to-be-aired "Korea's Next Top Model", and this attempt will hopefully bear fruit in the future.

"It's hard to ignore the fun factor when making a program. We have brought both entertaining and high quality shows over the years and will continue our efforts to offer something original, creative and stylish in the future as well", Lee said.
_______________
Model Cha Ye-ryun is the host of OnStyle's hit show "Style Magazine". The show is one of many fashion-related programs aired in Korea. / Courtesy of OnStyle

"Fashion on TV: are just facts enough?"
by HanCinema is licensed under a Creative Commons Attribution-Share Alike 3.0 Unported License.
Based on a work from this source