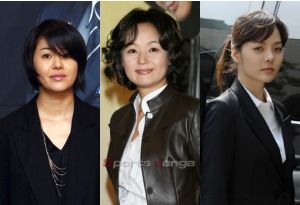 It seems that the new keyword for 2008 will become 'women power'.

Go Hyun-jung will be acting as Korea's first female president in her next drama, SBS "Big Things", set to air in May 2008.

Go Hyun-jung's role of Seo Hye-rim is a passionate lawyer. She quits after taking responsibility for the arrest a political gang's leader, and becomes famous as a civil rights lawyer. She runs for office and is elected as a female president.

Go Hyun-jung also acted as the first female chief of a police squad in the MBC drama "Hit". She is receiving roles that differ from her past image, and that are many "firsts" in the drama industry.

Also, Chae Rim will be coming back to television as a female bodyguard.

The KBS drama "Powerful Opponents" will air April 14, and her character Cha Young-jin is an unstoppable, aggressive bodyguard.

"Powerful Opponents" will portray the lives of the people in the Blue House and incorporate a love triangle with the President's (Lee Deok-hwa) son (Lee Jin-wook) and another bodyguard (Lee Jong-hyuk).

Bae Jong-ok is already acting as a detective in MBC drama "Park Jung-geum, Heavenly Beauty". It is her first time in an action role in her 21 years of acting, and her character is a 38-year-old, high school graduate.

A critic of popular culture, Kang Myeong-seok judged, "Actresses are breaking the conception that they must only act in romances. The circumstances have also changed. Roles are no longer limited to old women roles but are aiming at the working woman".

"Female presidents, bodyguards... 'Women Power'"
by HanCinema is licensed under a Creative Commons Attribution-Share Alike 3.0 Unported License.
Based on a work from this source