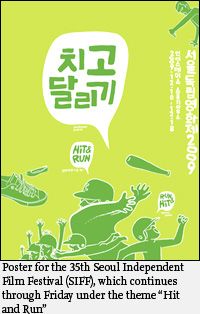 The past year was a fruitful one for local independent cinema, with Lee Chung-ryoul's documentary "Old Partner" rewriting box office history for the genre and Yang Ik-june's "Breathless" blazing through international film festivals. The festivity culminates with the Seoul Independent Film Festival (SIFF), which continues through Friday in Spongehouse Myeongdong (Joongang Cinema).

The annual year-end event kicked off on Dec. 11 under the theme "Hit and Run". This year SIFF received a whopping record of 722 submissions, up about 100 from last year. A total of 45 works (34 shorts, 11 features) have been selected to compete for several cash prizes. The awards, including the grand prize, amount to 51 million won and will be given out to outstanding works regardless of genre.

In addition to the competition pool, works by Filipino independent cineastes and Korean-Chinese director Zhang Lu, as well as animation pieces and noteworthy shorts and documentary films will be screened.

The festival offers indie film buffs a chance to watch works from the Philippines, a flourishing market for the genre. Among the seven movies being offered is "Criminal of Barrio Concepcion" by Lav Diaz. The award-winning ― and controversy-provoking ― director recently teamed up with Korea's Hong Sang-soo and Japan's Naomi Kawase for a local omnibus project.

This 1998 film is about a reporter who meets a man claiming to be the perpetrator of a headline-making abduction case. Despite her efforts to be cautious she becomes increasingly drawn into his story. The film will be shown at noon, Friday.

Also not to be missed are eight works by Korean-Chinese director Zhang Lu, including "Desert Dream" ("Hyazgar"), which opened here in 2007 to critical acclaim. A man refuses to leave his deserted village straddling China and Mongolia where he continues to plant trees in a vain effort to fight desertification. A mother and son who have defected from North Korea find refuge in the village. It will be shown at 12:30 p.m., Tuesday.

A descriptive video service for the visually impaired is available for "Earth's Women", a 2009 feature-length Korean documentary competing for the festival's awards, at 8:10 p.m., Wednesday.

The festival will wrap up with a surprise screening at 4:30 p.m., Friday. Afterward the closing ceremony will take place, featuring the awarded works. "Breathless" stars Kim Kkot-bi and Yang Ik-june, who also directed the film, will host the event.

For more information visit Open the link (English and Korean).

"Festival Celebrates Indie Film Spirit"
by HanCinema is licensed under a Creative Commons Attribution-Share Alike 3.0 Unported License.
Based on a work from this source