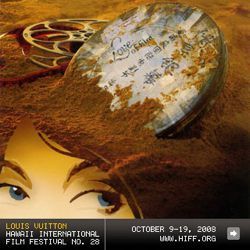 The event will open with the U.S. premiere of "The Divine Weapon" from director Kim Yoo-jin, starring Jung Jae-young and Ahn Sung-ki. "The Good, the Bad, the Weird", starring Jung Woo-sung and directed by Kim Jee-woon, will have its Hawaii premiere on the closing night, October 18th. Jung Woo-sung will receive the HIFF award for "Achievement in Acting". The spotlight on Korea continues with several Korean films, including "The Chaser", "Crossing", "Dachimawa Lee", and "Sunny".

Visit the festival site at Open the link

Established in 1981, the Hawaii International Film Festival (HIFF) is dedicated to the advancement of understanding and cultural exchange among the peoples of Asia, the Pacific and North America through the medium of film.

Is the premiere international film event in the Pacific
Has won the praise of governments, filmmakers, scholars, educators, programmers and film industry leaders throughout the world
Is the largest "East meets West" Festival in the United States
Is the primary source for the discovery and exhibition of Asian and Pacific feature films, documentaries and videos in the nation
Is one of the Asian movie industry's gateways to the West
Is a meeting place for filmmakers and actors  Quentin Tarantino and Katsuhito Ishii met at HIFF and later collaborated on KILL BILL
Showcases 150-plus films, many world and U.S. premieres
Has premiered such movies as CROUCHING TIGER HIDDEN DRAGON, ONCE WERE WARRIORS, THE PIANO, SHINE, SHALL WE DANCE, Y TU MAMA TAMBIEN, VOLVER, BABEL, "The Host", "JSA - Joint Security Area" and TWILIGHT SAMURAI.
Holds private and public events, award shows and special movie showings

WHO
Over 65,000 in attendance each year
Over 500 filmmakers, international delegates and film industry professionals each year
Celebrities from around the world  Previous attendees include: Samuel L. Jackson, Quentin Tarantino and Kevin Smith from the U.S., Ken Watanabe from Japan, and Lee Byung-hun, Shin Hyun-joon and Ha Ji-won from Korea

WHERE
Oahu venues: Dole Cannery Stadium 18, the historic Hawaii Theatre and on Waikiki beach
HIFF's presence on the Neighbor Islands is significant with screenings on Maui, Kauai, Big Island, Lanai, and Molokai

Each year in preparation for the event, HIFF programmers view some 1,000 films and choose an average of 150 features, documentaries and film shorts. Among them are world premieres, North American premieres, American premieres, U.S. premieres, experimental films, films representing social and ethnic issues, and first features by new directors.