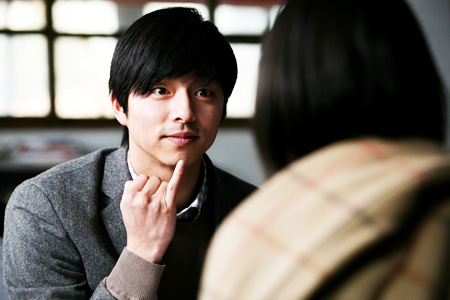 "Silenced" is a film based on the true story of hearing-impaired children being sexually abused by their teachers. / Yonhap

Life is often stranger than fiction, and both director Hwang Dong-hyuk and actor Gong Yoo were shocked to discover that Gong Ji-young's bestselling online novel about child sex abuse was based on a true story.

The "Coffee Prince" actor, who read a hard copy of the book while serving in the military, proactively sought a way to turn "Dogani" into a film. Hwang on the other hand greatly hesitated about adapting the 2000-2004 case in which the teachers and principal sexually abused students at a Gwangju school for the hearing impaired.

During a press meeting Monday in Seoul, the director deliberated for about a month whether or not he should helm the upcoming film, "Silenced".

Hwang explained that he was moved by a line from a news article that the novelist quotes in the book's epilogue - how when it was announced in sign language that the sexual offenders would stop short of receiving probation and 10-month prison sentences, muffled cries of the hearing impaired children filled the entire court room.

In a film clip revealed to the press, author Gong said her novel, which attracted 16 million online readers, depicts less than half of the actual cruelty. Hwang said he film depicts even less than the novel.

"Because film is an audiovisual medium it portrays even less than the novel. Yet it is no less shocking or powerful", he said. He added that he refrained from contacting actual victims or people involved in the case. Several students that attended the Gwangju school did however appear in the film as extras.

"Silenced" is about Kang In-ho (played by the actor Gong) who is newly appointed to teach art at a school for hearing impaired children. He notices something sinister about the school and learns about the terrible infliction against the students. He teams up with human rights activist Seo Yoo-jin (Jung Yu-mi) to reveal the case to the world and penalize his colleagues and superiors.
Gong said he found the novel powerfully gripping and contacted the author during his last military vacation about adapting the film onscreen.
The actor said that he didn't want his character to be portrayed as a hero, but rather have more ordinary, human flaws. In the original novel Kang In-ho is more weak-willed, as he oscillates between his conscience and the need to financially support his daughter.

The film however required some action scenes such as attacking a sexually abusive teacher with a flower pot or punching a window in a fit of rage. "I had to express a very complex state of emotion that was a combination of the fury toward the offenders and a wrath that stemmed from deep within. It was enervating", he said.

For Gong, the role marks a turn from his usual romantic comedy roles, and he said he was afraid he did not having the artistic depth to fully portray such emotions.

The director, who opted to work with Daniel Henney in "My Father" despite the actor's stereotyped heartthrob image, said it was a pleasure working with Gong. "I felt Gong Yoo had other sides to him besides being sweet. Gong sought to turn this story into a film and this shows how righteous he is. He isn't afraid to do something others haven't".

"There are so many people out there fighting for such causes, and I feel a little Ashamed of myself when I think of them. Nevertheless I hope this film that I am taking part in will help raise awareness about the incident and help ameliorate things in real life", said Jeong.
The principal of the school is reported to have died from cancer earlier this year while the rest of the teachers continue to work at the same school. A committee was set up late 2010 by the provincial government to reexamine the case.

"Silenced", a CJ Entertainment release, is slated to open in theaters on Sept. 22.