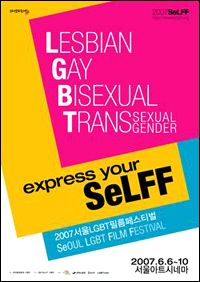 Painting the world with rainbows and giving sexual minorities a voice, the 2007 Seoul Lesbian, Gay, Bisexual and Transsexual/gender Film Festival will unfold from June 6 to 10 at Seoul Art Cinema. A total of 15 international and domestic films, including full-length pieces and shorts, will be screened.

The festival, newly dubbed SeLFF, provides anyone and everyone a chance to celebrate their respective identities in full color. Through the language of cinema, the most commercial form of mass communication, the event speaks out to the world "This is Queer", as part of the 8th Korea Queer Culture Festival (www.kqcf.org), also to continue until June 10.

"Seen through the camera, queer folks' passion for life and the reality that they face around the world will help all audience members to affirm themselves and provide them with a unique and delightful outlook on life", said Park Jin, the SeLFF program director, in a statement.

"This is why the English acronym of the reborn film festival not incidentally sounds exactly like the word `self', for we hope that the SeLFF will serve as an arena where you start with your own selves and meet other selves", said Park.

"The Picture of Dorian Gray" (2007), co-produced by the United States and Britain, will inaugurate the festival at the cinema, 7 p.m. on Wednesday. The film portrays the internal torment of the rich and beautiful Dorian (David Gallagher), whose corrupt inner-self surfaces through the video artwork created by an admirer.

British director Duncan Roy brings to screen a hip, modern rendition of Oscar Wilde's classic tale of vanity and depravity. Roy fully and explicitly explores the homosexual relationship between the characters, an implicit theme in the literature. The film is visually striking, with electrifying colors and strong contrasts of light and dark.

Among the feature films is "Out: Smashing Homophobia Project Out" (2007), the second installation in the Feminist Video Activism WOM's anti-homophobia project. The documentary traces the struggles of three lesbian teenagers in Korea.

"Out" was in the spotlight at the 2007 Women's Film Festival of Korea, where it won the Ock Rang Award. The piece was produced with support from the Korean Film Council.

Following the screening on June 10 (1:30 p.m.), moviegoers can participate in a discussion with makers of the film.

Ned Farr's "The Gymnast" (2006) from the U.S. will close the festival. Jane, a retired Olympics star gymnast, leads a passionless marriage and a dead-end job as a massage therapist. One day, she is asked to join a Cirque du Soleil-type troop and gladly accepts the lucky offer. Her life takes an unexpected turn when she meets the mysterious and alluring dancer, Serena.

"The Gymnast" delves deep into the human desire for self-discovery and the dangers one willingly takes to achieve it. The movie won 19 awards at 11 international film festivals, including Best Feature at the 2006 L.A. Outfest. It is also worth noting that Korean actress Addie Yungmee plays the role of Serena.

After the screening of "Hatsu-koi" (2007, Japan) at 6 p.m., June 8 and 9 and a series of lesbian shorts at 1 p.m., June 9, the films' respective directors will join the audience to discuss their work.

Tickets for all movies cost 5,000 won and can be purchased on the site at Seoul Art Cinema, located in Jongno-gu, or online in advance at www.yes24.com, www.maxmovie.com, and www.ticketlink.co.kr. For more information about the film festival, visit www.selff.com or call (0505) 303-1998.

"Film Fest Spotlights Sexual Minorities"
by HanCinema is licensed under a Creative Commons Attribution-Share Alike 3.0 Unported License.
Based on a work from this source