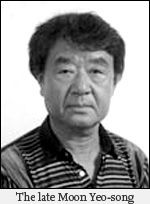 Filmmaker Moon Yeo-song passed away Sunday due to a chronic disease. He was 77.

Born in Jeju Island in 1932, Moon moved to Japan when he was three years old and graduated from the University of Tokyo's Arts division. In 1966 he made his debut with the anticommunism film "Spy Scheme", starring veteran actors Go Eun-ah and Namkoong Won.

The film "Never Never Forget Me" gained him recognition in 1976. The love story of two young students and their memorable relationship became a big hit, and he continued to gain popularity with films like "There Really is a Dream", "I'm Really Sorry", "Crazy for You" and "Nobody Knows" in 1977 and "Our High School Years" the following year.

Moon started a teenage film boom with popular stars such as Im Ye-jin and Lee Deok-hwa.

Moon was later known as one of the three representative filmmakers of teenage movies, along with the late directors Kim Eung-chon ("Momo is a Child", 1979) and Suk Rae-myeong ("High School Buddies", 1976).

His "Really Really" series has recently been remade into a musical by younger artists, which brought the trendy movies back into the spotlight for younger fans while bringing back memories to older ones.

He is survived by two sons and a daughter.

"Filmmaker Moon Dies"
by HanCinema is licensed under a Creative Commons Attribution-Share Alike 3.0 Unported License.
Based on a work from this source