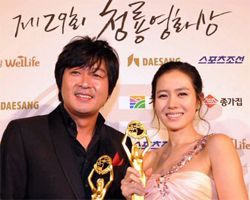 This year's Blue Dragon Awards' best film honor went to "Forever the Moment", a moving film based on a true story about how the Korean women's handball team overcame the odds to win the silver medal at the 2004 Athens Olympics. The film's co-star Kim Ji-young also won the best supporting actress award. Its producer, Shim Jae-myeong, said that he wanted to make an inspirational film about people outside the spotlight.

Kim Yun-seok of the year's top thriller "The Chaser" was honored with the best leading actor award and Son Ye-jin of the romantic comedy "My Wife Got Married" was named the best leading actress. This year's top grossing film "The Good, the Bad, the Weird" directed by Kim Jee-woon garnered four awards - best director, cinematography, art direction, and the movie attracting the most moviegoers. Comedy "Crush and Blush" directed by newcomer Lee Kyoung-mi went away with the best new director and best screenplay awards.

There was a touching moment when the late actress Choi Jin-sil was commemorated and given an honorary popularity award. Actor Ahn Sung-ki, who co-starred with her in "North Korean Partisan in South Korea", commented that she had always been a cheerful mom and actress and that her works will forever be remembered in people's hearts.