Finecut seals further AFM deals for Leafie and others 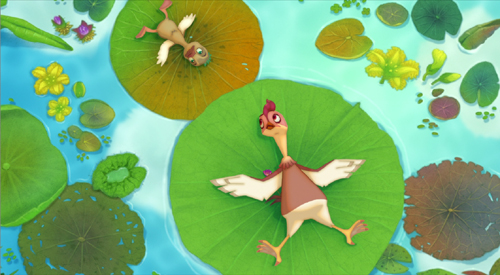 Seoul-based film sales company Finecut has announced a raft of further deals from the recently wrapped American Film Market (AFM) including more for "Leafie, A Hen Into The Wild", the watershed hit animation in Korea. The film sold to Ascot Elite for German-speaking territories and Conquest Filmes for Brazil.

Produced by leading Korean production house Myung Films and the animation studio Odoltogi, "Leafie, A Hen Into The Wild" is about a hen who runs away from a farm to eventually raise an adopted duckling. The animation previously sold to ex-USSR excluding Baltic States (CP Digital), Portugal (Lanterna De Pedra Filmes), Turkey (Horizon), Middle East (TDH), and Indonesia (Pratama).

Finecut says that most of the film's overseas distributors are planning theatrical releases aimed at family audiences early next year.

The new comedy film "Marrying the Mafia IV - Family Ordeal" went to JoyNContents for Japan, International for Taiwan and CJ CGV for US distribution.

Japan's JoyNContents also picked up "Heartbeat", starringKim Yoon-jin from the US TV series "Lost" and hit films such as "Shiri", along with three other Finecut library titles.

"Finecut seals further AFM deals for Leafie and others"
by HanCinema is licensed under a Creative Commons Attribution-Share Alike 3.0 Unported License.
Based on a work from this source