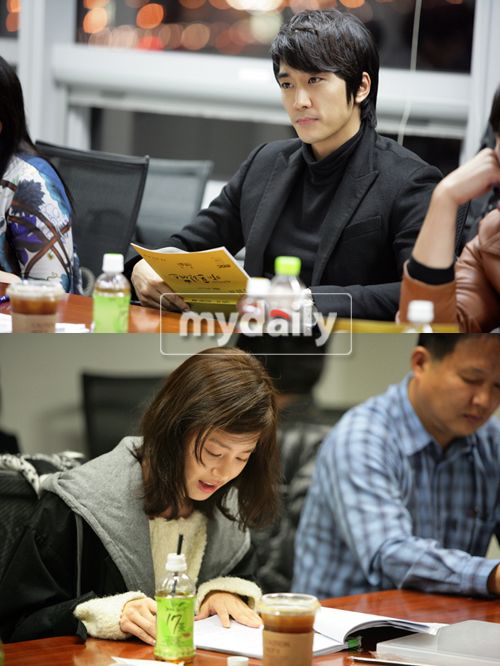 Song Seung-heon and Kim Tae-hee started their first rehearsal for "My Princess" in Ilsan Dream Centre on the 20th.

On that day, not only those two but Park Ye-jin, Lee Soon-jae, and Im Ye-jin also attended and made their first encounter; they practice for about 3 hours.

Song Seung-heon, who is trying his first romantic comedy after his debut, led fresh mood all practice long, and Kim Tae-hee also laughed a lot while practicing her bright lines and situations.

Especially, Lee Soon-jae used a lot of quotes which lightened this drama up.

Production company of this drama, 'Curtain Call' said, “Each characters and actors/actresses are showing 100% synchrony rate. Their acted together perfectly so fast.”

"My Princess", which is the follow up of "Home Sweet Home", is about the love story between Park Hye-yeong, a successor of biggest company in Korea, and Lee Seol, who becomes princess from misery university student overnight. This drama will go on air in next January.

"First encounter of Song Seung-heon and Kim Tae-hee from 'My Princess' is already congenial"
by HanCinema is licensed under a Creative Commons Attribution-Share Alike 3.0 Unported License.
Based on a work from this source