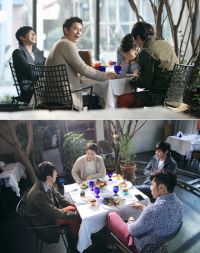 One by one, the four men of the new SBS weekend drama "A Gentleman's Dignity" (written by Kim Eun-sook, directed by Sin Woo-cheol) include the snide architect Kim Do-jin, the passionate and genuine Im Tae-san, the thinkerly lawyer Choi Yoon and the happy-go-lucky, natural playboy Lee Jeong-rok.

On the afternoon of April 7th the first day of filming took place at a restaurant in Seoul's Seocho-dong neighborhood, where the characters -- all close friends from high school -- sat down to shoot an enjoyable brunch scene.

Despite being the first time these actors have appeared together they worked in harmony, displaying perfect teamwork and reflecting their characters' individual personalities and styles, showing the polished dignity and grace of their middle-aged quartet.

The was especially clear during the break from shooting, where the four men were engrossed in conversation like they'd been close for a long time. It was a similar scene before the shoot, where they appeared like veteran actors, meticulously checking their scripts.

The drama's producers noted, "Jang Dong-gun, Kim Soo-ro, Kim Min-jong and Lee Jong-hyuk all were uncommonly close with each other, and despite it being only the first day of shooting they completed the scene with perfect harmony between them" and "As some of the country's finest actors, they exude an energy that will breathe fresh life into the drama. With these actors, we hope to create high expectations for a first-class romantic comedy".

Experiencing love and farewells, success and frustration, these four classy men of ages 40+ will show a more beautiful middle age on "A Gentleman's Dignity", premiering on May 26th.

"First photos of 'the middle-aged quartet' from upcoming drama "A Gentleman's Dignity""
by HanCinema is licensed under a Creative Commons Attribution-Share Alike 3.0 Unported License.
Based on a work from this source