Flower girls from "A Gentleman's Dignity" 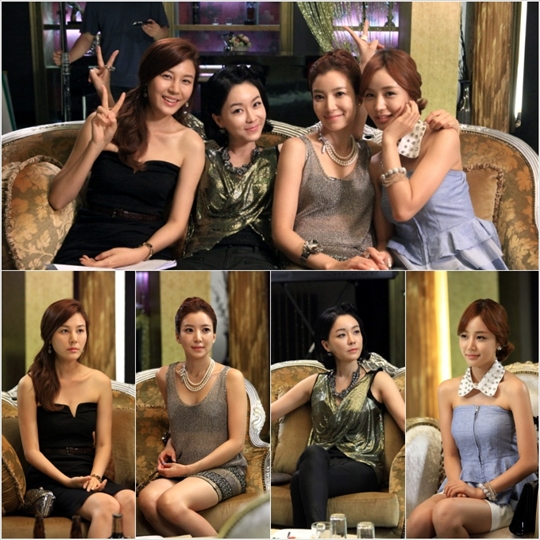 On the nineteenth episode of the SBS drama "A Gentleman's Dignity" on the 28th, they get all dressed up and look different for a change.

The four women make eyes go round with what they have never shown before. They reveal their sexiness as much as they want.

Kim Ha-neul is wearing a black top dress that is cut into a 'V', Yoon Se-ah is wearing a sleeveless that shows her skin, Kim Jung-nan is wearing gold spangles and Yoon Jin-yi is wearing a cute tube top that has a zipper right down the middle.

This scene of them together was taken on the 26th. The four appeared with a sexy fashion code and heated up the atmosphere. The four gathered together during break times to chat the time away and showed how close they are. They talked about the response to the drama and various things that happened while making the drama.

Eldest of them all, Kim Jung-nan leads them like Park Min-sook from the drama. While they happily chat and laugh they also created the scene without NG all at once.

It seems that everyone's getting some joy thanks to these beautiful actresses who don't stop smiling. They are the vitamin source of the set.

"Flower girls from "A Gentleman's Dignity" "
by HanCinema is licensed under a Creative Commons Attribution-Share Alike 3.0 Unported License.
Based on a work from this source