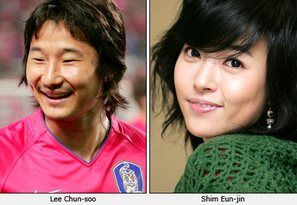 Star footballer Lee Chun-soo, 26, and singer/actress Shim Eun-jin, 27, admitted Thursday that they have been dating for one year.

Shim's management agency Olive9 said in a press release that the two have been "meeting with amicable feelings for about a year".

The agency also confirmed that the former member of pop group Baby V.O.X. recently visited the Netherlands, where Lee runs as a midfielder for Feyenoord Rotterdam.

The two were romantically linked as they were spotted together several times in Seoul, which they denied. Shim previously said in a TV program that she had a boyfriend "who is not an entertainer", apparently referring to Lee.

Lee, a two-time World Cup player, has made headlines for making unexpected visits home during his playing season. He is also known to have dated actress Kim Min-kyung-III, a former Miss Korea.

Shim announced a solo album in 2005 after her internationally popular girl band was disbanded and recently made a successful acting debut through the epic TV series "Dae Jo Yeong".