For Actress Yoo In-na, 'Wobbles' Are Just Part of Finding the Way 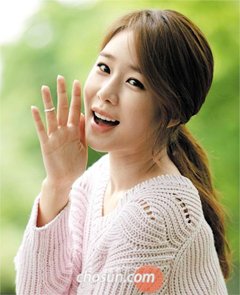 For actress Yoo In-na, spending two hours each evening swapping stories with listeners as the host of a prime-time radio show, "Volume Up" on KBS 2FM, is nothing but fun.

"I like reading books out loud and listening to people's stories", she said of the program, which now has the highest listener ratings for the 8 p.m. to 10 p.m. time slot across both AM and FM bandwidths.

Yoo originally dreamed of becoming a rock star. She joined an entertainment agency as an apprentice singer in 1998 at the age of 16, but things did not pan out as she had hoped after 11 years at five agencies. She recalled how she came close to joining a girl group at one point before this aspiration, too, fell flat.

"You need to be a good dancer to do that, but I was unable to memorize the choreography properly, as though I had some kind of affliction", she joked. Yoo said she practiced her dance moves for eight hours a day, six days a week, for a year before calling it quits.

In 2006, Yoo joined YG Entertainment as an apprentice actress. "If singing wasn't meant to be, I decided to give acting a go because it seemed fun. I never gave up. A lot of my friends did, though, even though they were prettier and more capable than me", she said.

Her big break came in 2009 with MBC's hit sitcom, "High Kick Through The Roof". With this, Yoo made a lasting impression on the public, and her popularity grew when she was cast in a number of TV dramas. She can now be seen in the KBS weekend drama, "Lee Soon-sin is the Best".

Yoo, who debuted late in the industry at the age of 27, had this advice for aspiring celebrities, singers and actors as they prepare for the world of showbiz.

"Even a compass, which is supposed to tell you which direction to go, wobbles before it finds its true course. I hope young people aren't too scared of facing the wobbles along the way, because they're a natural part of the journey".