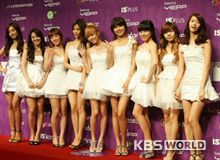 Some five-hundred foreign fans from ten countries including Taiwan, Singapore and even the U.S. have visited South Korea to see the nine girls perform, spending roughly two or three million won on their trips.