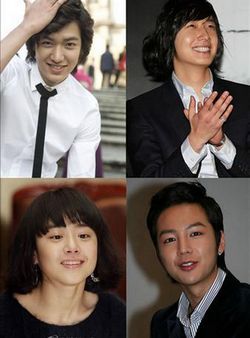 Lee, of the hit new drama series "Boys over Flowers", has shot up to stardom. Jeong is also getting significant attention, and his drama "Iljimae Returns - Moon River" has yet to start.

Moon, who won the Grand Prix at the SBS TV awards late last year, was the heroine of the historical drama "Painter of the Wind" while Jang cemented his popularity for his role in the hit music drama "Beethoven Virus".

Lee is well built. In the drama, his character sports curly hair so his head looks bigger on screen but strong facial looks match his masculine figure.

In contrast, Jeong and Jang have more of a feminine flair. They have smooth, small faces while Moon is close to a real-life fairy tale character.

◇ Big career break
Moon first gained attention playing the childhood character of actress Song Hye-gyo in the hit 2000 series "Autumn in my Heart". The Moon syndrome began with her 2004 film "My Little Bride". In the latest "Painter of the Wind", she was comparable to her co-star, veteran actor Park Shin-yang. Her role of a woman disguised as a man was also well played.

Jang played the rebellious younger brother of actress Jeon Do-yeon in the 2005 "Lovers in Prague". He continued to appear in "Hwangjin-i" in 2006, "Hong Gil Dong" last year and in the latest "Beethoven Virus" in which he played a genius musician.

Jeong was another case of overnight stardom through the hit sitcom "High Kick!", which ended in 2007. In the lead role of the new drama "Iljimae Returns", he is anticipated to play a character compared to Lee Joon-gi's performance in the 2008 "Iljimae".

Lee Min-ho is the latest heartthrob and teen superstar thanks to "Boys over Flowers". He debuted in the EBS drama "Secret Campus" in 2006 and appeared in a number of movies including "Public Enemy Returns" and "Our School E.T" but didn"t gain much attention. His role of the wealthy and cocky "Gu Jun-pyo" in "Boys" has earned him explosive popularity.

◇ Only 22, ready to soar
Receiving the grand prize at last year"s TV awards, Moon said she feels more sorry than grateful. She said "I want to continue acting but I'm greatly burdened by this award".

Lee has confessed to difficult times in the past 3 to 4 years when he was unknown and things didn"t work out as well as he thought they would.