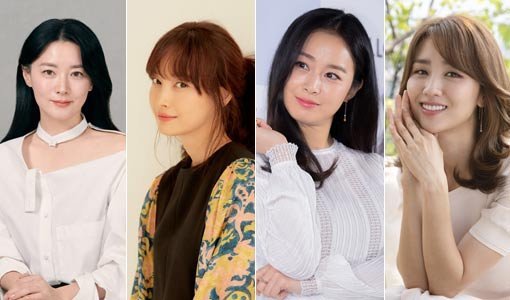 Is it because of the emotions deepened through everyday life? Actresses who have stopped acting for a while are re-entering the public in their roles as mothers in different situations. Lee Young-ae, Lee Na-young, Kim Tae-hee and Park Ha-sun will play colorful mother figures on the big and home screens.

Lee Young-ae recently returned to screens with the film "Bring Me Home" for the first time in 14 years. It tells the story of a mother who searches for her missing child. Lee Young-ae explained her reason for choosing "Bring Me Home" as, "I wanted something that could provide positive influence in a world our children have to live in".

She's in reality a mother of twins who are in the second grade and her opinion of society influenced her choice in the movie. After briefly suspending her acting career due to marriage and childcare, she was able to gain a new perspective on reality as a mother, and continue her acting career.

Actress Lee Na-young, who married Won Bin and gave birth to a son in 2015, returned for the first time in 6 years with last year's November movie "Beautiful Days - 2017". She says she received many offers before her return, but none moved her. Then she met "Beautiful Days - 2017", a film about a North Korean escapee mother who doesn't give up hope until the very end, despite harsh conditions. Lee Na-young had said, "It would have been a difficult role to play if I didn't have a child". She then moved on to the drama "Romance is a Bonus Book" as a woman whose career has been cut short because of marriage and childbirth. Her experience helped her decide on the drama.

The absence of activity due to childbirth and childcare is not an exception to celebrities. It is a so-called 'career break', but it is also a time to build a family and build up a greater amount of emotion in the process of communicating with children.

Kim Tae-hee returns for the first time in 5 years as well, with the tvN drama "Hi Bye, Mama!", as a mother who dies from a sudden accident, but can't cross over to the next world and roams around her husband and child. Motherly love is the key. The actress married singer and actor Rain and has two daughters. This will be her first motherly role.

Working mom Park Ha-sun returns with the film "The First Child" as a 'working mom' who wants to balance childcare and work at the same time. As if she's telling her own story, the film revolves around the reality women face when they return to the workforce after having a child.

While experiencing actual marriage, childbirth and childcare, these actresses say that they chose these dramas or films because they 'sympathized more after becoming a mother'. It is also the reason why they tackle leading roles in thrillers and fantasies, instead of just being a mother who sacrifices herself for her family.

"Four Artists Bring Four Different Kinds of Motherly Love"
by HanCinema is licensed under a Creative Commons Attribution-Share Alike 3.0 Unported License.
Based on a work from this source