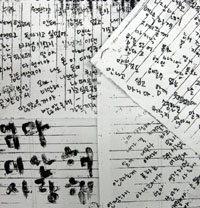 When Lee Eun-joo, who committed suicide on Feb. 22, was found dead in her apartment, she was wearing sweatpants and a short-sleeved T-shirt. A pencil sharpener and blood stains were found on her bed, and there were traces of attempts to slit her wrists on Lee's arms.

Police also found notes that were apparently written by Lee, one saying, "Mom, I am sorry, and I love you". Another note read, "I wanted to work very much. Living does not seem to make sense anymore. I don't want to blame anyone. I wish I had more money... I wanted to earn money". Lee also wrote that she was tired of living, because her dignity had been ruined and she did not want to go through that experience. "I feel like I am trapped, and I don't want others to see me like this. It's the middle of February already. I am being chased by time", wrote Lee in a final note.

It has become known that Lee received psychiatric counseling on Feb. 3 in a university hospital in Bundang. She complained of feeling "listless and disinterested", having "difficulty concentrating", and a loss of appetite and insomnia as she only slept one hour a day. Her doctor advised her to come again in two weeks and prescribed her pills for depression. But Lee never visited the doctor again.

Lee's death is even more heart-wrenching because she happened to play dying characters many times. In her movies "Bungee jumping of their own", "Lover's Concerto", "Garden of Heaven", "Taegukgi" and her last work "The Scarlet Letter" she portrayed gloomy and sorrowful characters who eventually died.


In "Bungee jumping of their own" her character dies in a car accident in the final scene when she goes to a train station to meet her lover played by Lee Byung-hun. The fact that Lee died on Feb. 22, just like her character, many believe that her death had been predestined.

The funeral hall where Lee's body is currently placed was full of shock and sorrow. Many film industry figures and fellow actors have visited the place in person or sent flowers to express their condolences to Lee's family.