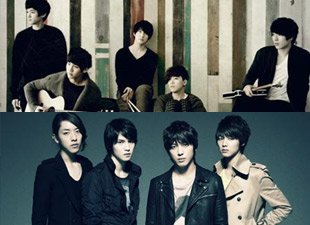 FT Island and CNBLUE will be holding a concert in conjunction with CJ E&M in Los Angeles!

The date for this big event, marking both groups' step into the American market, is slated for March 9th (local time). This concert is also the first time the two bands will be coming together for one concert.

FT Island was Korea's first mainstream band in their teens. They were instantly so successful that they were nicknamed the "monster newbies". They also have scored an Oricon number one hit in Japan, along with other charts all over Asia.

CNBLUE also is a force to be reckoned with. The band has performed over 100 concerts in Japan before debuting. Also, their album shot to number one on major music charts just within five days of their album release. The guys have performed for sold-out concerts, sold out their Japanese singles, and even received the "Golden Disk" awards.

FT Island and CNBLUE are both signed under FNC Music. The agency said that the LA concert marks only the beginning as both groups are planning to also enter the European market, along with other countries all over the world.