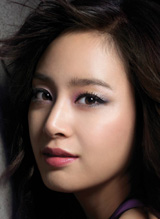 The launch of an advertising campaign in Japan featuring Korean actress Kim Tae-hee has been cancelled due to anti-Korean sentiment.

Japanese daily Nikkan Sports said Kim was set to appear at the launch of a new cosmetic product by Rohto Pharmaceutical but organizers called off the event citing safety concerns after spiteful comments criticizing Kim's selection as the model appeared on the Internet.

In 2005, Kim and her brother, actor Lee Wan, were named advocates of Korea's territorial sovereignty over the Dokdo islets, to which Japan lays a dubious claim. This has led to Kim being targeted by anti-Korean groups in Japan.

They posted photos of Kim and her brother visiting Switzerland as goodwill ambassadors wearing T-shirts and distributing songs that said Dokdo belongs to Korea. Japanese netizens said Kim should not be allowed to work as an entertainer in Japan due to her "anti-Japanese" attitude.