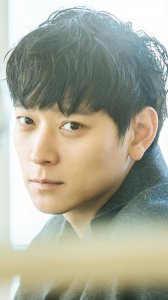 Actor Gang Dong-won has made a comeback after a two-year absence, wearing an outfit that perfectly suits him. He plays a malicious taoist in the movie "JEON WOO CHI : The Taoist Wizard", fabulously portraying the classical-novel character and even reinterpreting him in a fresh and mischievous way. He looks nothing like his confused character in "M" (2007) or the sad death-row convict he portrayed in "Our Happy Time".

When we met with Kang on December 16 prior to the movie's opening, he said that he wanted to gain popularity with more people. He said, "It's an entertaining movie. I tried hard to become closer to viewers. But unfortunately the rhythm of my acting was too slow".

Throughout the interview, Kang kept saying that he wanted to be more popular. He seemed upset about his previous movie, "M", which performed poorly at the box office. He deliberately chose an entertaining role this time and worked hard to make his character lovable. Kang's character is a skilled taoist and overflows with confidence. He easily makes fun of the king and loves women.

Kang used his own mischievousness to make his character all the more playful. It was his idea to create 10 one-of-a-kind copies of his character when fighting with ghosts. He said, "The script said that I just had 10 other copies of myself, but that sounded boring, so I gave each copy its own unique personality. If you watch closely, you will recognize their personalities. Each of them represents a certain trait of my character: one is brave, one is wayward, one is righteous, and so on. The last one of them is one who spits".

Kang also changed the originally haughty tone of his character into a flawed one, because he thought that a character with flaws was easier to approach for the public. Kang realizes that he has a hard-to-approach image because he rarely appears in public and is far from talkative. He said, "That's what people think about me. But once they get a chance to talk to me, their opinion changes. I can be playful, like my character, when I'm around my friends. After shooting this movie, I've become more talkative.

Director Choi Dong-hoon and martial arts director Jung Doo-hong lauded Kang for perfectly performing difficult wire actions, which he pulled off thanks to the training that he had received when shooting the movie "Duelist". He also learned how to dance for five months, which explains why his long legs and arms move so gracefully in action scenes.

The expression on Kang's face changed from playful to serious when he began talking about action scenes. He said, "I hate amusement park rides. When I happened to visit a famous bungee jumping place, people tried to make me bungee-jump, but I couldn't do it".

Though playing his character in "JEON WOO CHI : The Taoist Wizard" has taught him how to have fun with colleagues, Kang says the production was a difficult one for him. He said, "I had to jump off a six-story building 20 times and I still vividly remember that feeling of horror".