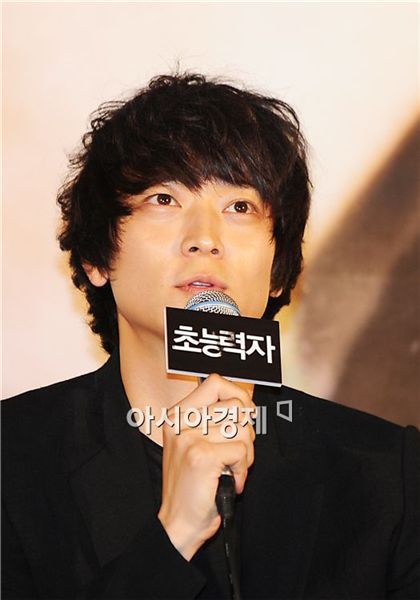 Actor Go Soo speaks to reporters during a press conference for film "Haunters" held at a Megabox theater in Dongadaemun of Seoul, South Korea on October 18, 2010. [Park Sung-ki/Asia Economic Daily]

Korean actor Gang Dong-won has said that he would want the ability to teleport to outer space although in the past, he wanted to have the power to control people's minds as his character does in his upcoming film "Haunters".

"After playing someone who can control people's minds, I came to realize that it's a power that can make you lonely", the statuesque actor explained of his reason for preferring to teleport.

He was speaking to reporters at the press conference for his new thriller held at a Megabox theater in Seoul today.

"Haunters" is about a powerful being who grows up with his eyes bandaged and is protected by his mother but after breaking away from her, he soon realizes that he is able to control people's mind with his eyes.

He leads an ordinary life until he gets caught using his power to take money from a loan bank by a person named Im Kyu-nam (played by Go Soo), who is not affected by his power.

Frustrated by this, Gang's character starts to hurt people around Im, for which Im seeks revenge.

The fantasy film is director Kim Min-suk-IV's debut feature -- he has worked and assisted famed director Bong Joon-ho on smash hit "The Host" (2006) and director Kim Jee-woon for "The Good, the Bad, the Weird" (2008).

Kang made his debut in the MBC drama "The Funny Wild Girl" in 2003, and since appeared in various works, most notably in "Temptation of Wolves", "Duelist", "JEON WOO CHI : The Taoist Wizard" and "Secret Reunion".

Ko has appeared in a score of dramas and films since his debut in 1998 such as "Piano", "Will It Snow for Christmas??" and "White Night".

"Haunters" will open in local theaters on November 11.

"Gang Dong-won says "wants the power to teleport" "
by HanCinema is licensed under a Creative Commons Attribution-Share Alike 3.0 Unported License.
Based on a work from this source