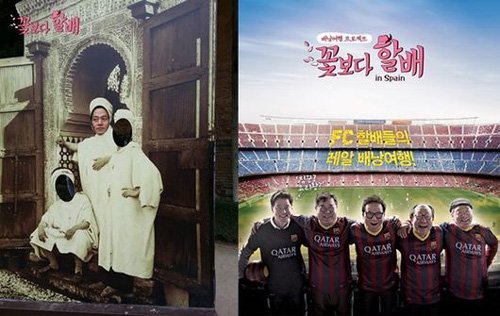 The hugely popular reality TV show "Grandpas Over Flowers", about the adventures of a group of elderly actors on an overseas tour, is doing wonders for Korean airlines.

Korean Air and Asiana are increasing flights to Spain, Taiwan and Turkey, where the tourist attractions provided the backdrop for the show.

Korean Air said Tuesday that the occupancy rates on flights to cities that appeared in the TV show stood at 89 percent in the first quarter, up an average of eight percentage points on-year. In contrast, overall passenger occupancy on international flights fell four percent.

Thanks to the explosive popularity of the latest episode, which saw the grandpas travel to Madrid, the occupancy rate on flights to the city rose 12 percentage points on-year to 84 percent.

Korean Air plans to deploy the B747-400 passenger plane on the route to Madrid until June 16 because it can carry 147 more passengers than the A330-200s that currently serve that route.

Asiana saw the number of passengers on flights to Taiwan rise 13 percent on-year in the first quarter to 68,000. Numbers on flights to Istanbul rose 35 percent to 24,800. Asiana is also offering direct flights to Barcelona from last week until June 20.

"Geriatric TV Show Boosts Business for Korean Carriers"
by HanCinema is licensed under a Creative Commons Attribution-Share Alike 3.0 Unported License.
Based on a work from this source