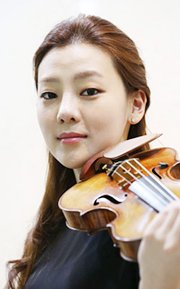 But even a disappointing fourth-place finish did wonders for her career as she was spotted by the influential Russian conductor Valery Gergiev and courted by European management agencies.

"I wasn't envious of the winner. I've been there many times already. I just wanted to broaden my chances in Europe, and the only way I knew was through competition", Kang said.

Kang is also planning to record an album with pianist Son Yeol-eum at Beethoven Hall in Hannover, Germany at the end of the month. It will include violin sonatas by Robert Schumann and Johannes Brahms as well as Clara Schumann's romances for violin and piano. When the album is released in September, Kang plans to tour Korea.

"I just love music. I think violin is the tool that was given to me so that I can play music for my entire life", she said.