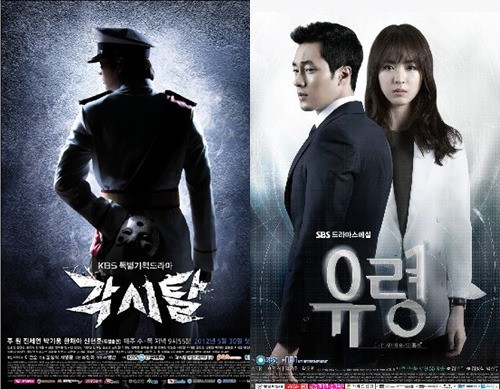 The competition between "Bridal Mask" and "Ghost - Drama" is becoming more interesting.

According to AGB Nielson Media Research on the 13th, SBS drama "Ghost - Drama" rated 14.2%. This is 0.2% lower than the previous day. There was a gap between "Bridal Mask" which ranked first place with 16.3% but it is a strong competition with its intense spread out.

Kwon Hyeok-joo (Kwak Do-won), Kim Woo hyeon (So Ji-sub) and Yoo Kang-mi (Lee Yeon-hee) discovered the internal spy and dug into it. The scene where Jo Hyeon-min (Uhm Ki-joon) came face to face with Kim Woo hyeon after killing chairman Jo Kyeong-sin (Dong Bang-woo) for revenge made sweat gather in hands. At the end of the episode, Kim Woo hyeon was captured for bugging the prosecutor's office.

Meanwhile, "I Do, I Do" rated 8.9% and is still unable to recover. This is 0.8% lower than the previous episode and has no choice but to sit back and watch the competition between "Ghost - Drama" and "Bridal Mask".

""Ghost - Drama" falls slightly, "Bridal Mask" hard to catch"
by HanCinema is licensed under a Creative Commons Attribution-Share Alike 3.0 Unported License.
Based on a work from this source