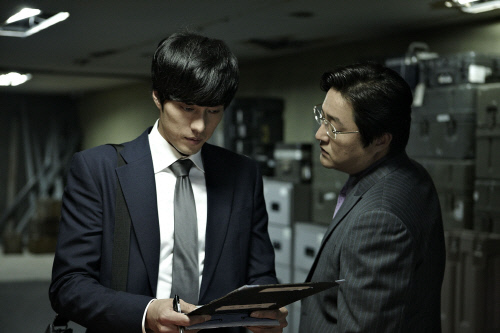 So Ji-sub and Kwak Do-won meet again in a movie.

Woo Hyeon and Hyeok-joo from the drama "Ghost - Drama" were intense with each other relating to the 'Sin Hyo-jeong case'. Now they have become close partners in solving cases.

While "Ghost - Drama" is left with two more episodes to go, movie "A Company Man" brings good news for these two actors. "A Company Man" is a spectacle story about salary-men working in a serial killer company and So Ji-sub takes on the role of Hyeong-do, a professional killer who is the most promising out of the company. Because of a moments hesitation, Hyeong-do becomes a target of the company and has to fight for his life against his colleagues.

Kwak Do-won takes on the role of executive director Jong-tae. He's a character with a complex against So Ji-sub because he has no experience and can't beat him in fist or intelligence. He can't stand So Ji-sub who does everything right and even picks the dirt up about him.

Not only do they appear as killers which is completely different from their image now, coincidentally, Kwak doesn't like So from the beginning like he did in the drama.

Apparently, the two worked great as a team just like they did on the drama set up. They should be making a different approach as movie actors and not drama actors this time.

"A Company Man" will be released this fall.

""Ghost - Drama" So Ji-sub and Kwak Do-won in movie "A Company Man""
by HanCinema is licensed under a Creative Commons Attribution-Share Alike 3.0 Unported License.
Based on a work from this source