"Ghost - Drama" Uhm Ki-joon is cute and not chilling? 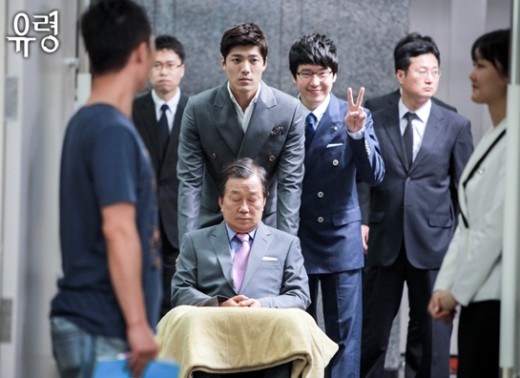 Eom takes on the role of Jo Hyeon-min, a cold-hearted murderer who kills people without even blinking in the SBS TV drama "Ghost - Drama". His bone-chilling charisma gave tension to the drama.

Uhm Ki-joon's other side can be seen in a picture in the photo sketch corner on the "Ghost - Drama" homepage.

Following the cold expression of Jo Hyeon-min is an unexpected pose at the end of the picture. Jo Hyeon-min is walking out next to Chairman Jo Kyeong-sin in a wheelchair and is holding up a 'V' with a cute face. This is a complete contrast to his usually chilling image.

Meanwhile, "Ghost - Drama" is cancelled on the 1st and 2nd due to the London Olympics.

""Ghost - Drama" Uhm Ki-joon is cute and not chilling?"
by HanCinema is licensed under a Creative Commons Attribution-Share Alike 3.0 Unported License.
Based on a work from this source