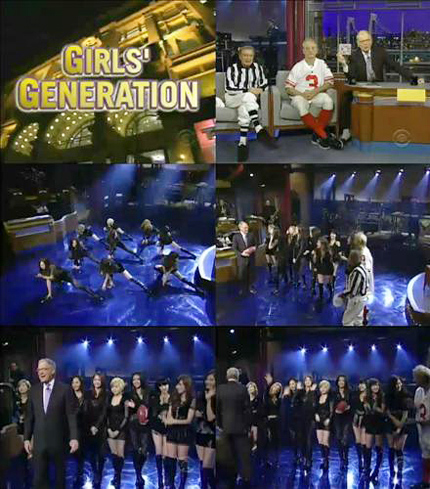 Girls' Generation appeared on the CBS talk show program "The Late Show With David Letterman" in the USA on January 31 (local time) and presented a live performance. According to their agency SM on February 1, Girls' Generation appeared on the show and sang the title song of their album entitled "The Boys" that had been released in the USA last month after arranging the song into a band version. The MC of the show, David Letterman, introduced the group members, saying, "The next guest members for today's show is the star Korean group who released their first album 'The Boys' in the USA. Let's give a warm welcome to the group members who will make their first appearance on American TV". Letterman drew attention as he said "Thank You" in the Korean language to Girls' Generation after watching their performance. 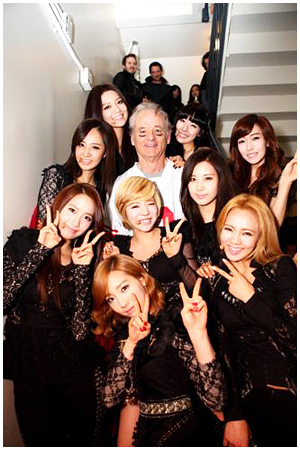 SM said, "The program celebrated the 30th anniversary when Girls' Generation appeared, so many people in the entertainment business and viewers showed more interest in the episode". The group members expressed their feelings after the show by saying, "From the moment when our appearance was decided until this moment when we finished filming, we have anticipated it very much.

It was such an enjoyable and happy experience". In addition, the group members took a commemorative photo with a film director and actor Bill Murray, who appeared in the movie series "Ghostbusters".

Many local fans came to the Ed Sullivan Theater where the program was filmed to see Girls' Generation from early in the morning, and the group members responded with friendly greetings to their fans while giving them their autographs. 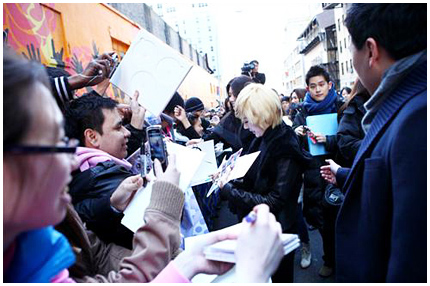 ▲ Girls' Generation with their fans

Girls' Generation will also appear on the popular talk show on ABC entitled "LIVE! with Kelly" on February 1 at 9:00 am (local time), and they will give an interview with AP press and NBC's entertainment program "Extra" that delivers entertainment news.