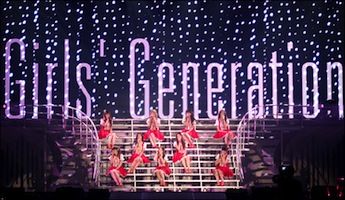 Amid the shouting fans and pink glow sticks, this year's hottest girl band, Girls' Generation, rocked the stage at their first concert Sunday night at the Fencing Stadium, Olympic Park.

The nine-member band, comprised of Yoona, Choi Soo-young, Hyoyeon, Yu-ri (Kwon Yuri), Tae-yeon, Jessica, Tiffany, Sunny and Seohyun, heated up the 6,000 seat venue from start to finish, without showing a moment of hesitance during their constant singing and dancing.

The group launched its Asia tour in Seoul with the two-day concert titled "Into the New World" and proved once again that they were indeed one of the best idol bands in the country.

The show started off with the girls dressed in white, angelic outfits, complete with white thigh-high boots, singing their hit number "Genie". The group offered most of its songs, but that didn't stop the girls from performing at their best.

Before the concert, the group's 20-year-old leader, Taeyeon, told the press that she was worried whether they would be able to fill all the seats, but it seemed the young singer was being a bit too modest. The venue was packed, especially by the group's male fans, waving pink glow sticks and shouting out the members' names and song lyrics in perfect unison.

After some of their best known songs like "Etude" and "Kissing You", the nine girls gave their own individual performances. From sexy to classic, the girls revealed their hidden talents throughout the show.

Tiffany surprised fans as she stepped onto the stage dressed in a sexy silver mini-dress singing Rihanna's "Umbrella", while Sunny sang Boney M's " Sunny " in a cute black-and-white outfit.

While Choi Soo-young shared in the Christmas spirit with fans with "Santa Baby", the youngest, Seohyun, 18, presented "16 Going on 17" from the classic film "The Sound of Music". Hyoyeon, "the dance machine" of the group, stole the scene with her powerful and sexy maneuvers.

Having nine members seemed to work as an advantage, with the members running around the stage, waving to their screaming fans. The members were able to maintain the vocals, where Jessica, Tae-yeon and Tiffany were especially strong.

During a segment of the "Wizard of Oz" theme song " Over the Rainbow ", some of the members flew across the stage in white nightgowns on wires sprinkling confetti, while the stage ceiling opened up during a scene from "Singing in the Rain", pouring rain down on the members dressed in bright colored raincoats performing tricks with their yellow umbrellas.

This year's fashion trend dominated the band's wardrobe, from colorful skinny jeans, tight shorts to "the marine look", and the concert displayed all the hit trends they presented throughout the year. Moreover, the girls also got to show off their personal styles during some sequences.

During "Chocolate Love", for example, the concept was black, but the members differentiated themselves from one another with subtle accessories, such as leather, fur, big chunky jewelry and jackets with pointy shoulders.

The overall show was a visual delight, complete with colorful fireworks and vibrant stage lights following the girls around. But the most distinctive feature was the huge LED screen in the backdrop. The large screen showed various clips and visual effects that were perfectly choreographed with each theme and song, adding diversity and creativity to the already exciting event.

Girls' Generation wrapped up the three-hour show with encores such as the "Hahaha Song", "Complete" and "Baby Baby", some in tears but all with big, proud smiles.

The girls' first concert may have lacked some up-close and personal time with their fans, but the lineup of 37 songs was more than enough to keep the fans jumping to the beat. Not once did the girls look out of breath, and this ongoing energy and love toward their fans proved once again that this year was indeed "Girls' Generation".

The group's upcoming Asia tour includes stops in Tokyo, Bangkok and Shanghai, as well as other cities.
_________________________
Pop group Girls' Generation performs during its first concert "Into the New World" at the Fencing Stadium, Olympic Park, Sunday evening. The nine members changed into five different outfits and offered more than 30 songs. The group will continue its Asian tour next year, with stops in major cities including Shanghai, Bangkok and Tokyo. / Courtesy of SM Entertainment

"Girls' Generation Impresses Fans With First Concert"
by HanCinema is licensed under a Creative Commons Attribution-Share Alike 3.0 Unported License.
Based on a work from this source