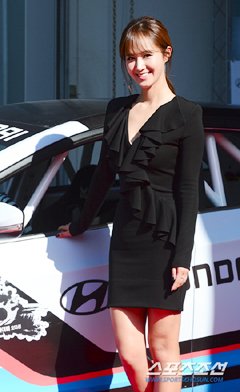 The singer told reporters how excited she is for the opportunity during a press event for the show on Wednesday.

"I like sports that involve speed, and I was also curious about the idea of finding Korea's first rally car driver. I readily accepted the offer", Kwon Yuri said.

Although it is still unfamiliar in Korea, rallying is a very popular motorsport around the world.

"The Rallyist" will test contestants in various survival missions to gauge their ability and potential. The winner will become Korea's first rally car driver.

A total of 4,986 people applied since May. The show will air every Saturday night from this weekend and run for 10 episodes.

"Girls' Generation Kwon Yuri to Host Korea's 1st Rally Car Show"
by HanCinema is licensed under a Creative Commons Attribution-Share Alike 3.0 Unported License.
Based on a work from this source