Girls' Generation to debut in Japan 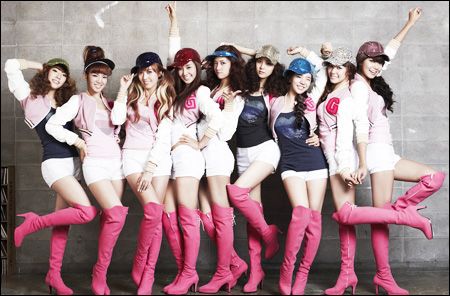 The group's agency SM Entertainment announced Friday that the nine members were leaving their local fans for the time being to "start a new journey".

"The girls are planning to introduce themselves to Japanese fans through a showcase held at the Ariake Coliseum in Tokyo, Japan, on Aug. 25", the agency said through a press release.

The venue can house more than 10,000 people, and the agency added that the girls were preparing an exciting show for not only Japanese fans, but also the Japanese press, music labels and agencies.

Along with the showcase, the group will also release a debut single with Nayutawave Records, a branch of Universal Music. The label works with numerous top Japanese artists including Kiseki and Greeen. Girls' Generation is the only Korean artist on the label.

"Thanks to the group's high popularity in Asia, the band has been receiving numerous requests from Japanese music labels. We hope the band and Nayutawave Records will create synergy in making the girls become the hottest issue in the J-pop industry this year", the agency added.

With specific plans set out, Japanese fans will get to watch Girls' Generation starting in August with the showcase and the release of a single in September. The agency said they will fly back and forth for both local and Japanese events for the time being.

The group's first DVD, which contains clips and music videos, will also be released on Aug. 11.

Meanwhile, local fans can get a taste of Japan and the girls beforehand with a special photo book in stores right now. The photos, taken in Tokyo, show a more personal side of the girls, away from the shiny spotlight and makeup, as themselves. It comes with a special DVD that shows clips of the girls taking the photos and walking along the streets of busy Tokyo.

Will they captivate Japanese fans?

The band's decision to move to Japan comes a bit late, compared to other girl groups including Kara, T-ara and 4Minute, who all either released albums or held shows and fan meetings in Japan already.

Local singers performing and releasing an album in Japan started in the mid 2000s. Starting with BoA, some of the hottest artists and bands such as Rain, Se7en and TVXQ moved to Japan and created a firm fan base for K-pop music.

News that Girls' Generation signed a deal with one of the top music labels in Japan is a good sign, as the music industry there is dominated by bigger labels and agencies compared to the smaller ones here.

Making their debut in 2007, the Girls' Generation shot to stardom as one of the newest and most recognizable groups during the time. Having nine members helped them gain recognition, but it was eventually their songs, dance moves and the overall package that enabled them to become one of Korea's most popular acts.

Whether or not their charm will work in Japan is still up for question, as Japan is certainly a tough crowd with already a number of idol bands dominating the eyes and ears of its public.

No other K-pop girl band managed to captivate the Japanese public yet, and it seems both the local and Japanese fans will keep a close watch on their first official journey to the neighboring country, with plenty of competition from Korea alone.

"Girls' Generation to debut in Japan"
by HanCinema is licensed under a Creative Commons Attribution-Share Alike 3.0 Unported License.
Based on a work from this source