Girls' Generation voted singer of the year by Gallup Korea 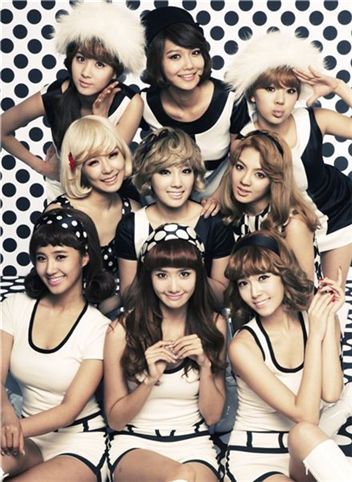 Popular female idol group Girls' Generation has been voted singer of the year by major survey firm Gallup Korea, making it the second consecutive time the girls have won the recognition.

A press release by the girls' agency SM Entertainment said Tuesday that in a poll asking 3,401 people over the age of 13 to name their favorite singer, Girls' Generation came out the winner after taking 31.5 percent of the votes.

Others singers who made it to the top 5 were boy band 2PM, songstress Jang Yoon-jeong, veteran singer Tae Jin-ah and five-member girl group Kara.

Girls' Generation triumphed in the poll for best song as well, posting their newest single "Hoot" on top by winning 7.2 percent of the ballots, followed by "Oh!" from their second album which gained 2.9 percent of the votes. Their songs "Gee" and "Genie" had taken first and second place on the same chart last year.

Meanwhile, Huh Gak from music cable channel Mnet's singing competition SuperstarK2 and female group miss A won the title for best male and female rookie of the year, respectively, according to Gallup.

Girls' Generation have led a successful year so far, claiming several second-time feats including being name winner of the grand prize at Korea's Golden Disk Award, taking the best artist of the year award at the 2010 MelOn Music Award, and seeing their hit song "Oh!" named song of the year at KBS' televised music show "Music Bank" last Friday.

They had taken the same recognitions last year as well, winning KBS' song of the year title with "Gee" from their first mini-album.

Having led a fruitful career in Japan as well, where the girls officially debuted in August of this year, Girls' Generation will also appear on TV Asahi's "Music Station" where they will compete against top singers in Japan on December 24 and MBC's "Music Central" on 25 which will evaluate artists' annual achievements.

"Girls' Generation voted singer of the year by Gallup Korea"
by HanCinema is licensed under a Creative Commons Attribution-Share Alike 3.0 Unported License.
Based on a work from this source