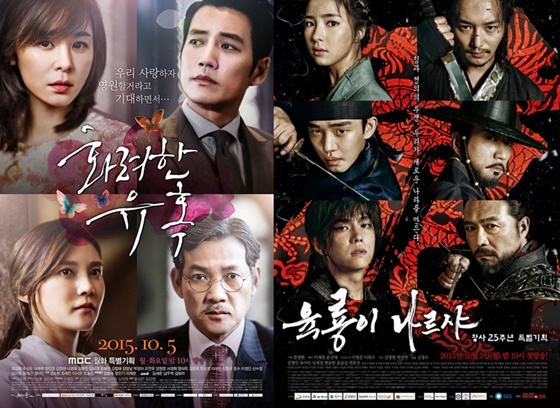 "Glamorous Temptation" and "Six Flying Dragons" start broadcasting on the 5th. The two are very different in color but are organized into 50 episodes.

"Glamorous Temptation" is about a woman who gets involved with the 1% high class society which she can't deal with. Joo Sang-wook and Choi Kang-hee star in it and Cha Ye-ryun the 'sub-star' appears as the Cinderella of politics.

However, a 50-episode drama based on modern times requires a bigger differentiation factor than others. Kim Sang-hyeob, the producer for "Glamorous Temptation" said, "This is the first time a modern day drama has been made which consists of 50 episodes. The drama focuses on every character's internal sadness and happiness.

"Six Flying Dragons" is based around monarch Lee Bang-won who created the base of good faith and six characters who are full of passion and success. It is the reunion of Kim Yeong-hyeon and Park Sang-yeon, the writers of "Deep-rooted Tree".

The cast is quite something; Yoo Ah-in from "Veteran" and "The Throne", Kim Myung-min, Shin Se-kyung, Yoon Kyun-sang, Byun Yo-han and other youthful stars.

How will the two dramas start off on the 5th?

""Glamorous Temptation" VS "Six Flying Dragons" "
by HanCinema is licensed under a Creative Commons Attribution-Share Alike 3.0 Unported License.
Based on a work from this source