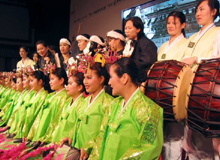 The festival that runs through November 6, brings together some 15-hundred people from about 30 different nations, including ambassadors. Early on during the festival, there was a parade of people wearing traditional clothing walking down the 1.3 kilometers long Itaewon road.

There were also dozens of food booths offering traditional dishes and cuisine from Asia, Europe, the U.S., and South America.

In addition, there was an exhibition of traditional crafts from each continent available for sale. Other features were cultural experience programs offering visitors a chance to try playing traditional instruments, and a photo zone offering costumes from around the world.