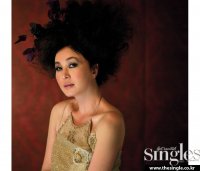 A daughter receives a box of kimchi a month after her mother dies of cancer. She stands aghast while reading the sender's name and realizes that it was the last present from her mother. The daughter, in speechless wonder, sheds tears in memory of her dedicated mother, who must have worried about the absence of kimchi on her daughter's dining table after she was gone.

The daughter shouts out in tears, "Mom, I'm sorry that I couldn't love you as much as you loved me".

The audience might understand, although it is the first scene of the drama, what kind of a mother figure the drama "My Mother" wants to depict. It is the mother who sacrifices her life to her daughter, and always feels sorry about being unable to financially support her child.

Go Doo-shim, a veteran actress, brings tough but warm sensitivity to her latest effort as the mother in the play. It is Ko's first theater appearance in seven years, after performing in the one woman show "I, I'm a Woman" in 2000. Based on a bestseller of the same title, the drama "My Mother" tells the story of a love-hate relationship between a mother and her daughter. Jang Young-nam, who appeared in last year's popular play "The Vagina Monologues", and Daehangno's rising star, Seo Eun-kyung takes on the role of the daughter.

"I played lots of 'mother' roles so far. But it was the story which gives a gentle but deep touch, that led me to take the role", said Ko in an interview with The Korea Herald at a studio in Daehangno last week.

"I lost my mother (a few years ago) and I have a daughter who will get married soon. So it is like injecting my real experience of being a mother and a daughter into a somewhat different situation. But I think the essence of the relationship between a mother and a daughter will be similar to all. It looks different only because it differs from how much they are willing to show their affection to each other", said Ko.

Asked about how she feels about performing on the stage after a seven-year hiatus, she said, "I feel fear, pressure and tension on the stage. The stage terrifies me, but at the same time, it gives me thrills, enjoyment and reaffirms the meaning of being an actor".

It seemed that Ko no longer cares about her appearance. Dressed in a brown hanbok with white rubber shoes on her feet, what the 56-year-old actress wanted was to portray a mother who becomes emotionally unhinged when the world tries to hurt her child.

Speaking in her Jeolla accent, the actress continued to concentrate on her role of a mother who loses her temper as her daughter faces opposition from her boyfriend's family on their marriage.

Ko yells at her daughter that she wouldn't let her get married saying she doesn't deserve such treatment. But she blames herself. "What do I have for my life? Did I have a chance to learn or did I meet a wonderful husband? For me, you are the only one that I can be proud of".

Ko thinks the drama will be one of the best choices for mothers and daughters trying to restore their damaged relationships.

"I think the play will be best recommended to mothers and daughters who have difficulties in communicating with each other and who are not good at saying 'I love you'", Ko said.

"Bring your handkerchief with you", she added.

"Go Doo-shim brings rugged warmth"
by HanCinema is licensed under a Creative Commons Attribution-Share Alike 3.0 Unported License.
Based on a work from this source