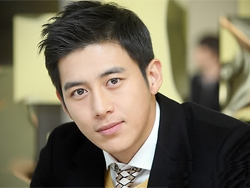 One hot actor may be back on the singles market, but another has officially announced his departure.

Actor Go Soo carefully announced that there was indeed someone he has been seeing. According to his management company, HB Entertainment, on March 10th, "[Go Soo was] surprised and slightly taken aback to return from an advertisement shoot abroad and see all of these articles popping up [about him]. There is someone that he met through a mutual friend that he grew to develop a relationship with".

Go Soo had said, "She has no relation or connections to the entertainment world so I've been very cautious about announcing it to the press. I would really appreciate it if the press would respect our privacy. If it continues to go well, I'll come out again to the public in the future with updates. So until then, please help us so that this can turn into a beautiful love".

HB Entertainment added, "We ask for your understanding on us not addressing the rumors sooner when it came out on the 8th. We had to first check the facts with the person directly involved. The two are still in the early cautious dating stage so we won't indulge any more details. We thank you for being patient with us and ask that you continue to support Go Soo's future activities".

Go Soo first debuted in the music video-- "Letter"-- for the k-pop group Position in 1998. He recently finished filming a new movie titled "The Front Line", where he had a leading role alongside Sin Han-gyoon.

"Go Soo Reveals His Relationship Status"
by HanCinema is licensed under a Creative Commons Attribution-Share Alike 3.0 Unported License.
Based on a work from this source