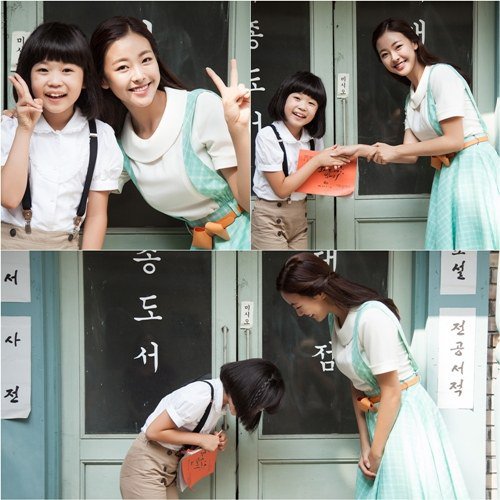 They gathered to make the poster of the drama and Go Won-hee peeked in on Kim Yoo-bin-I who was working her turn. Kim Yoo-bin-I in the picture is bowing respectfully to Go Won-hee and Go Won-hee is repeating after her. Another picture shows them holding a script in their hand and smiling for the camera.

Go Won-hee said, "I am so happy Kim Yoo-bin-I is playing the younger Bong-hee. I feel nervous about playing my first big role but I will do my best". Kim Yoo-bin-I said a few words of support to Won-hee.

"Shine Like the Stars" is based in the 1960s about a woman named Jo Bong-hee who drifts down to Haebangchon after her father dies and her family is left with nothing. She then becomes one of the best fashion designers in Korea and brings warmth and comfort to modern day citizens.

The 1960s was a time of despair and passion at the same time. The analogue set up of the drama should be something to look out for in the drama.

Lee Jin-seo, the creative producer says, ""Shine Like the Stars" will bring youthful feeling and energy to the viewers".

"Shine Like the Stars" will be released on the 31st this month.

"Go Won-hee and Kim Yoo-bin-I in upcoming KBS drama "Shine Like the Stars""
by HanCinema is licensed under a Creative Commons Attribution-Share Alike 3.0 Unported License.
Based on a work from this source