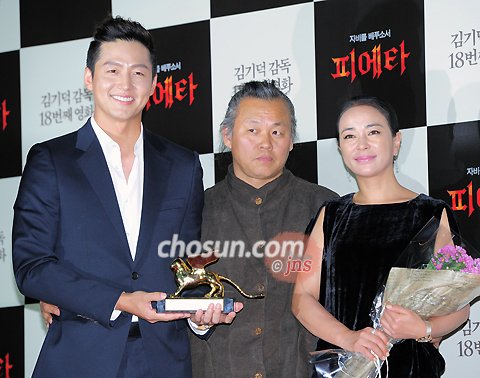 Film director Kim Ki-duk, who won the Golden Lion award for best picture at the 69th Venice International Film Festival with his latest film "Pieta", held a press conference upon his return to Korea along with starring actors Jo Min-soo and Lee Jung-jin on Tuesday.

"Perhaps those cinema fans who have silently lent me their support over the years would be the most delighted" that he won the award, he said. "When I go abroad, I'm often told that my films are popular in Europe, but not in Korea. But I always stress that this is not the case, and that there are also fans who love my films in Korea".

Jo added, "I heard that "Pieta" isn't being screened in many theaters in Korea, but people can only understand why it won the Golden Lion by watching it".

When asked if the movie was a social commentary on capitalism in Korea, Kim said, "I could say that it is about capitalism in its extreme form. What I wanted to say was that our lives, our families, and human beings in general are being destroyed by money. I wanted to depict the tragedy caused by materialism".

Director Kim Ki-duk is flanked by actors Lee Jung-jin (left) and Jo Min-soo at a press conference in Seoul on Tuesday after returning from the Venice Film Festival.

Kim also took the opportunity to explain his choice of wardrobe for the award ceremony, which looked rustic but turned out to be quite expensive.

"The top cost me W1.5 million and the pants W600,000. I made a big mistake. I had to show up a TV program before going to Venice, but all I had was a pair of shorts and a sweat-soaked T-shirt. So I went shopping in Insa-dong, where I thought I could pick something suitable for around W100,000 and W200,000. When I saw the actual price tags, my heart sank, but I was really pressed for time as I had to hurry back to the studio. 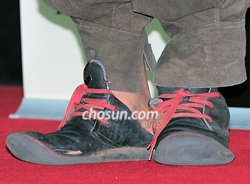 "Since the outfit cost a lot of money, I decided to wear it to all the film festivals I attend for the next year. That also goes for the shoes. I bought them after Cannes, and I've worn them every day for a year. Some people wear more expensive clothes to a single dinner, but I have just one outfit to last me a year at big occasions. Isn't this a forgivable sin?"

It was later revealed that Jo was a strong contender for the Best Actress award in Venice, but due to new selection criteria that any one film can only win one major award, she was left out of the running.

"I'd be lying if I said I wasn't disappointed. But the warmth of the people who held my hand when I came down from the stage, and the words of encouragement I got, with people telling me I had to make the sacrifice because the film itself was so good, and deserved the Golden Lion, were consolation enough", she said.