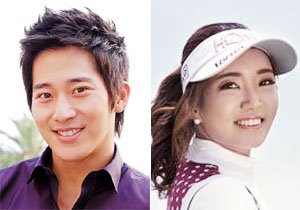 Lee Wan, which is his stage name, made his debut in 2004 and is the brother of actress Kim Tae-hee.

Lee Bo-mi has been playing on Japan's LPGA Tour since 2012 and has 21 titles under her belt. She topped the money list back-to-back in 2015 and 2016, ranking ninth overall in total career prize money on the tour.

The couple, who are both Catholic, were reportedly introduced to each other by a priest.