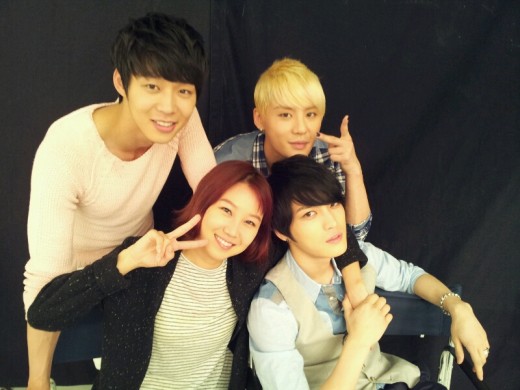 She posted a picture on her me2day on the 30th of April saying, "I am not dead yet".

In the picture, she is posing with JYJ Park Yoo-chun, Kim Joon-soo and "HeroÉ. She also has the smallest head out of all of them in the picture.

This picture was taken during a game advertisement that they did together and Gong Hyo-jin had outstanding game skills.

Those who have seen the picture say, "Gong Hyo-jin is always pleasant to look at", "They are all so pretty and handsome", "Who won the game?" and more.

"Gong Hyo-jin amongst JYJ"
by HanCinema is licensed under a Creative Commons Attribution-Share Alike 3.0 Unported License.
Based on a work from this source