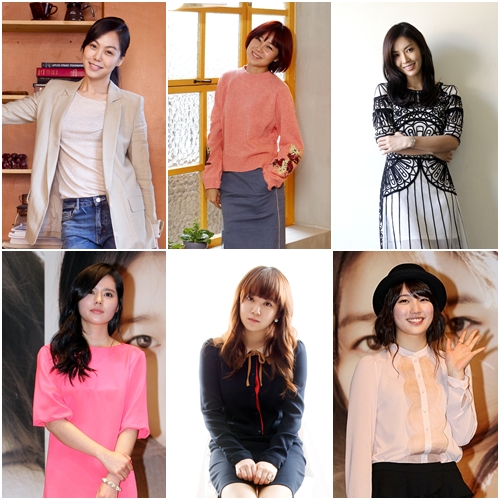 The ladies are back on screens. Actresses are making endless appearances in movies in the Korean movie industry currently swarming with male stories.

The mark of these actresses in the movies "Helpless", "Love Fiction" and "Gabi" which are currently heating up the box office, are significant. "Helpless" is about a man who looks for his fiancé when she goes missing and discovers that everything about her was a lie. Kim Min-hee's performance in this movie was great enough to say that her potential exploded out.

"Love Fiction" which was released before "Helpless" on the 29th last month is a movie about a man who hasn't had a relationship in his life but falls in love with a woman who grows out armpit hair. Gong Hyo-jin is the one with the armpit hair and she is lovely and cheeky as ever.

"Gabi" is based on the Korean Royal Refuge to the Russian Legation period about a man and a woman who used to be robbers returning to take out King Gojong. Kim So-yeon portrays the role of Tanya who holds back the Japanese's plot against the king who shakes her up with his cause.

This isn't all. A forgotten actress came back with the movie "The Beat Goes on" on the 15th. She is Kwak Ji-min. "The Beat Goes on" deals with the things that happen when a newly rising hip hop star gets threatened by a friend of exposing a sex video and everyone who used to work on the album together gather up. Kwak Ji-min played her part as the 4th-dimensional and ingenious beauty. This is the return of an actress after "Samaria".

Han Ga-in and Miss A Suzy are in the movie "Architecture 101" which is being released on the 22nd. This movie is about a woman finding her architect college mate 15 years later and asking him to build her a house. Han Ga-in plays the woman in the modern times and Suzy is the same character during college. It's been a long time for Han Ga-in since "Once Upon A Time In Highschool" and this will be the chance for Suzy to make her mark as an actress.

It's extraordinary the way actresses are so active in Korean movies. For several years Korean movies were taken over by actors with the thriller boom and actresses had to be content with the 'flowery' roles in action blockbusters as well. Even the audience are used to seeing it that way.

The way so many actresses are returning with characters that fit the unique sources of their movie isn't totally irrelevant to the various types of movies that have been released so far this year. Mystery and romantic comedy, historical plays and youth films to mellow are what have been lining up in cinemas this year.

The way the actresses are playing their roles in this phenomenon means that the public has been thirsty for various movies. But we can't say that their roles have expanded. There are still many more movies that are based on male stories.

A movie production said, "In a place where variety is virtue, the women's stories are the blue ocean. The current pattern of the movie industry could be a favorable factor for women to express attractive women".

We just have to sit back and watch if the return of the ladies will stay that way.

"Gong Hyo-jin, Kim Min-hee, Han Ga-in... they are back"
by HanCinema is licensed under a Creative Commons Attribution-Share Alike 3.0 Unported License.
Based on a work from this source