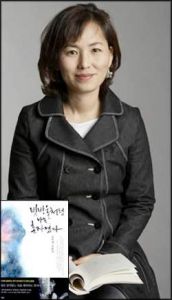 Novelist Gong Ji-young is the most sought-after novelist by publishing companies, because the number of her readers ranges between 100,000 and 800,000. Gong's works always draw the attention of filmmakers, film directors and even performance producers because of their deep and broad subjects.

Three of Gong's works have become bestsellers concurrently. That's an impressive feat given the recent slump in the domestic publishing sector. The "Gong Ji-young syndrome" began in April last year. Since writing her bestseller "My Sister Bongsoon" seven years ago, Gong wrote another big hit, "Maundy Thursday", and recently drew the spotlight for "Things That Come After Love", which she co-authored with Japanese writer Tsuji Hitonari, and the prose piece "I Was Alone Like a Raindrop". "Maundy Thursday" ("Our Happy Time"), on which a famous Korean movie is based, drew significant attention when the movie opened in September, becoming the first Korean novel in four years to top the bestselling charts, and staying on top for eight weeks in a row.
Is Gong's career as a writer at the pinnacle of its success? As if reflecting the "Gong Ji-young syndrome", various literary magazines have produced special editions on Gong in succession. Gong's enormous power in the publishing world stems from the fact that her personal spiritual wounds have struck a chord with today's readers. The secret of Gong's novels lies in their refreshing subjects. Gong prefers to write in short, concise sentences instead of long, sophisticated ones. Her writing style fully reflects her vigorous personality. Believing that love permits hurt, Gong devoted her entire being to her love, and--since a painful breakup--has been raising her three children on her own, earning her the nickname "a brave single Mom".

Wounds shared with the present time

The 44-year-old Gong has been married and divorced three times and has three children. She was hurt the most not only by the gloomy era she happened to live in but also by men. Nonetheless, Gong regards her wounds as common for the times. Born in Seoul in 1963, Gong graduated from the Department of English Literature of Yonsei University and debuted as a novelist in 1988 with her short novel "Daybreak". Her full-length novels include "No More Beautiful Wanderings", "Go Alone Like a Rhino Horn", "Mackerel" and "My Sister Bongsoon". She has also published the novel compilations "Courtesy for Humans" and "Crying Existence", and the prose works "The Unhurt Soul" and "Gong Ji-young's Monastery Journey". As the most prominent female writer of the 1990s, Gong has wrote extensively on the harsh reality that women of the present era face due to public misperceptions and the failure of society to shed its patriarchal way of thinking.
The first thing Gong read after learning the Korean alphabet was a poem by Sowol written on the wall of a bathroom. As a child, she wanted to become an orphanage director. Gong spent her adolescence writing poems and novels and was mature in a literary sense compared with her peers. While in college, she stayed away from the student movement but always sympathized with it. After graduating, she worked for a literary organization, where she answered phone calls and served coffee to novelists. In the fall of 1986, she decided to earn a master's degree in the hope of living a peaceful life by working as a college professor and writing poems. However, she dropped out because the lectures focused excessively on classical literature only. The next step she took was to participate in the labor movement.

Striking a chord with the public

Gong is known for her contradictory personality: easygoing and affectionate yet sharp and inapproachable. Some people still remember her as an ardent feminist and advocate of student activities. Gong's works always display their value and influence by walking a fine line between sociality and popularity. Either positively or negatively, that line inspires us to think of ways modern literature must communicate with the public. Gong was highly credited for raising public awareness about the abolishment of capital punishment by depicting the love between a man sentenced to death and a woman who had attempted suicide three times in the novel "Maundy Thursday" ("Our Happy Time"). Recently she received a special award from the South Korean committee of Amnesty International, and participated in a campaign calling for the abolishment of capital punishment.
Gong plans to stay out of the public eye for the time being to work on a new novel and spend quality time with her children. She will continue to touch the souls of readers with her simplicity and fragility. We look forward to her next masterpiece.