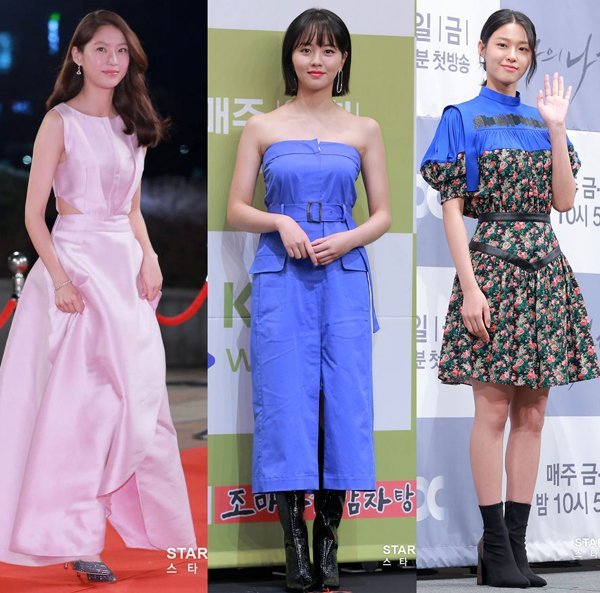 They differ in genre, from romance to action, so the actresses have been drawing attention with their own different way of loving.

"Flower Crew: Joseon Marriage Agency" is a 'lovely' story about a marriage agency trying to turn the rowdiest of women into the most precious one, starring Gong Seung-yeon.

Gong Seung-yeon is stuck between Seo Ji-hoon (Yi Soo) and Kim Min-jae-I (Ma-hoon), but she confessed her love to Kim Min-jae-I's character. Her shy confession surprised him, and Seo Ji-hoon's character cried tears of disappointment as he was listening.

Despite her shyness, Gong Seung-yeon's character has been very straightforward about her feelings.

Kim So-hyun dresses up as a man and a woman in "The Tale of Nokdu".

She plays Dong-joo, whose heart throbs for Jang Dong-yoon (Nok-doo) who has eyes for her and only her. She accepts his first kiss and therefore starts a romantic relationship with him.

Kang Tae-oh (Yool-moo) also has feelings for Dong-joo, and the three of them form a love triangle relationship. Meanwhile, Jang Dong-yoon's character's jealousy for Kim So-hyun and Kang Tae-oh's reaches its peak.

Seolhyun's character is aching along with the viewers with her painful love in "My Country: The New Age". While she has feelings for both Woo Do-hwan and Yang Se-jong's, her character chooses the more complicated love.

In the previous episode, she reunited with Hwi (Yang Se-jong) and was disappointed in Seon-ho (Woo Do-hwan), who said Hwi was dead.

She runs up to Hwi, who tries to keep her away, and says, "I'll keep you safe now". She declares that she will attain wealth and power to protect him from them.

"Gong Seung-yeon, Kim So-hyun and Seolhyun in Different Romances"
by HanCinema is licensed under a Creative Commons Attribution-Share Alike 3.0 Unported License.
Based on a work from this source