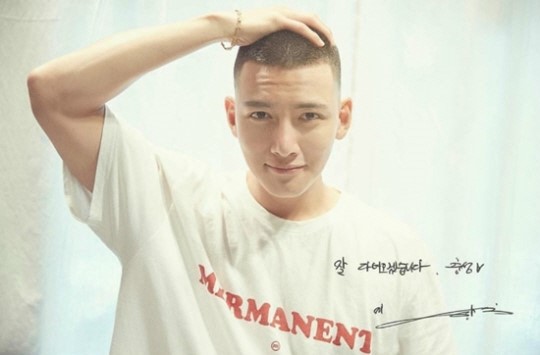 Actor Ji Chang-wook shared a picture of him and his freshly shaven head on SNS. In the picture, he is shyly smiling at the camera while rubbing his shaven head. As this small ritual is one of the finalizing steps as he report to his mandatory military duty, we must say good-bye to this brilliant actor.

In the picture released, he included a signature and a little message saying he will return with honor.

Actor Ji Chang-wook's been active in his acting career since 2008. He debuted with an independent movie, "Sleeping Beauty" and let his name spread widely with the drama, "My Too Perfect Sons" in the following year. In 2010, he played his first leading role in the drama, "Smile, Dong-hae" as Dong-hae, and proved his brilliant acting skills and many more shows such as, "Warrior Baek Dong-soo", "Empress Qi", "Healer", "The K2", and "Fabricated City".

He chose the drama, "Suspicious Partner" as his final work before he reported to the military and gotten a good feedback out of it. At the press conference for the drama, he said, "I'm thinking that I'll return as a better person after a diligent service in the military".

We hope that he will serve diligently as he promised and also a safe journey in this phase of his life!

"Good-bye Ji Chang-wook! Until We Meet Again"
by HanCinema is licensed under a Creative Commons Attribution-Share Alike 3.0 Unported License.
Based on a work from this source